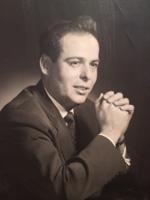 Morris Benjamin Wilkins, a World War II veteran and an entrepreneur who established several honeymoon resorts in the Poconos and created the iconic heart-shaped bathtub, passed away on Monday, May 25, 2015, Memorial Day, at the age of 90. The cause of death was heart failure. Mr. Wilkins was born in Stroudsburg, Pennsylvania in 1925, the oldest of three children, to Benjamin and Rose Wilkins, Russian and Hungarian immigrants. He enlisted in the Navy at the age of 17, shortly after the attack on Pearl Harbor. Mr. Wilkins served in the Pacific theater on two submarines, the U.S.S. Rasher and the U.S.S. Gurnard, until after the end of the war. Trained as an electrician during the war, he built a successful electrical contracting business soon after his discharge from the Navy. Mr. Wilkins eloped with the love of his life, Lois Faye Weitz, in 1955. They were married for 47 years, until Mrs. Wilkins passed away in 2002. In 1958, Mr. Wilkins along with a partner, Harold O'Brien, purchased Hotel Pocopaupack, an 18-room hotel located on the shores of Lake Wallenpaupack in Lakeville, Pennsylvania. Mr. Wilkins renamed the hotel Cove Haven and began marketing it as a couples-only resort. In an effort to generate more honeymoon business, in 1963 Mr. Wilkins created the heart-shaped bathtub and installed them throughout his hotel. Business boomed, particularly after a 1971 Life magazine featured a risque photograph of a couple covered only in soap bubbles sharing an embrace in the glossy red tub. Cove Haven quickly grew to more than 230 rooms. A 2010 Wall Street Journal article noted that the design quickly took hold at vacation resorts all over the world. "Morris Wilkins has done more for romance than a box of chocolates," quipped Jim Nolan, staff writer for the Philadelphia Daily News, in a 2000 profile. After selling Cove Haven to Caesars World of Las Vegas in 1969, Mr. Wilkins expanded and opened other resorts, including Paradise Stream, Pocono Palace, and Brookdale, and became president and chief operating officer of Caesars Pocono Resorts. In the 1980s, Mr. Wilkins continued to define the style of the quintessential romantic getaway property with innovations like the private in-suite swimming pool and the seven-foot-tall champagne glass whirlpool. Mr. Wilkins retired in 1997. Mr. Wilkins and his late wife Lois leave three children, Lori Wilkins Immerman of Los Angeles, CA, Michael Wilkins of Las Vegas, NV, and Jill Wilkins of Bethesda, MD and five grandchildren. Morris is also survived by Thomas Wilkins, of Stroudsburg, PA, a son from a previous marriage, and two grandchildren. He is also survived by his younger brother, David Wilkins, of Miami Beach, FL. A funeral service will be held on Friday, May 29, 2015 at 11:00am at Temple Beth Israel, 615 Court Street, Honesdale, Pennsylvania. In lieu of flowers, contributions may be made to Congregation Beth Israel, 615 Court Street, Honesdale, PA 18431 congregationbethisraelhonesdale.org/ .