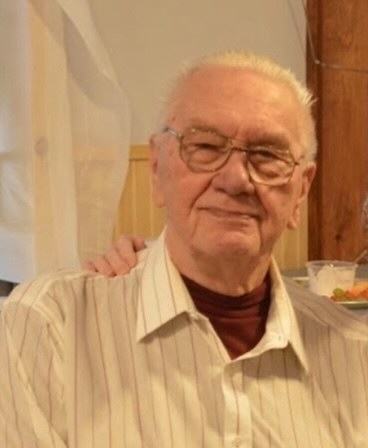 Please share a memory of Paul to include in a keepsake book for family and friends.
View Tribute Book
Paul Van Horn "To live fully, one must have love" (Wallace Wattles). On Thursday November 4, 2021, our dad, loving husband, and Papa went home to be with his Lord. In his last hours Paul was surrounded by his wife Lorraine, family, and friends who sent him off to heaven with all the love a person could have. Born to the late Alfred and Edna Van Horn he grew up in Hawley Pa. He was the older brother to sisters the late Helen Eckert (Leroy) and the late Lorraine Repsher (John), Linda Jenny and husband David of Kintnerville, Pa., and brother Gary Van Horn and wife Vicky of East Stroudsburg, Pa. Paul, always a hard worker, met the love of his life Lorraine Heeman while working at a riding stable in Dingmans Ferry, Pa., he was twenty. In February they celebrated 61 years of marriage. Paul was always on the go working hard to provide a good life for Lori and their family. In 1970 they moved to the Forest Lake Club, Hawley Pa., where he took a job as forester and caretaker and then as General Manager. They enjoyed their life at FLC immensely. He retired at the end of 1999 and purchased the Beach Lake Country Cafe. He then took a full-time position as a maintenance supervisor for Wayne County where he worked until his death. He was 82 years old. He was proud of his children, Paul Van Horn II, retired, residing in North Carolina. Colleen Van Horn, General Manager of the Forest Lake Club, residing in Beach Lake and Danene Van Horn, Sergeant Wayne County Sheriff's Department residing in Beach Lake. He provided an amazing childhood for his children where they could swim, fish, hike, hunt, and enjoy nature. Paul held many positions at the Beach Lake United Methodist Church throughout his lifetime such as Chairman of the Finance Committee, Chairman of Administrative Council and Trustee. He was President and Treasurer of Forest Volunteer Fire Department in the late seventies and early eighties. He is survived by his loving wife Lorraine and their family; Son Paul Van Horn II and fiancé Diane, and his family; grandson Paul III and finance Erica Abel and great grandson Russell, granddaughter Stephanie and Sheldon Sorenson and great grandchildren Gabriel, Lily and Wyatt of Palm Bay, FL and grandson Jack Van Horn, Second Lieutenant United States Air Force, Texas. Daughter, Colleen Van Horn, and her family; Granddaughter Callie McGinnis and Tim Shelton, great grandchildren Brody, Kendall, and Oakley; Granddaughter Mackenzie McGinnis and great granddaughter Aislynn; and granddaughter Rory Steelman. Daughter, Danene Van Horn, and her husband Brett Fuller; Daughter-in-law Kathy Van Horn and best friends Terry Scull and Wade Harrison. Two things in Paul's life were abundantly clear, he knew he was loved, and we know how much he loved us. There will be visitation at the Beach Lake United Methodist Church at 10:00 AM on Saturday, November 20, 2021, followed by a funeral service at 11 AM. All are welcome to attend. Arrangements are attended by the Arthur A. Bryant Funeral Home, North Main Street, Honesdale.

Share Your Memory of
Paul
Upload Your Memory View All Memories
Be the first to upload a memory!
Share A Memory
Plant a Tree