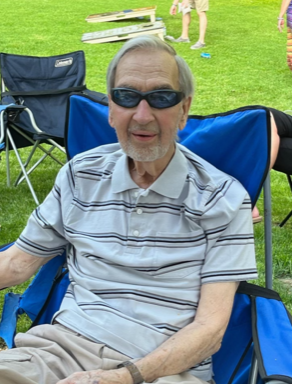 Please share a memory of Ronald to include in a keepsake book for family and friends.
View Tribute Book
Ronald S. Martin, 85 peacefully passed away at home on August 19, 2022. Ron was born in Honesdale PA on July 11, 1937 to the late Francis J. Martin and Ethel Smith Martin. He was a graduate of Honesdale High School Class of 1956. Upon graduation from high school, he joined the Army National Guard and began working in the family business, F.J. Martin and Sons, building houses and selling paint supplies and hardware. In 1976, Ron moved to Easton where he began working at Easton Area School District in the custodial/building maintenance department and eventually became the department supervisor. He retired in 2006 and returned to the family home built by his father in Honesdale. While living and working in Honesdale, Ron was a high ranking member in the Benevolent Order of the Elks (B.O.E), a member of the First Baptist Church in Honesdale, and a shortstop for Hesslings Softball Team. During his time in Easton, Ron was a volunteer fireman for Forks Township Volunteer Fire Department. He is survived by his daughters, Lori Hiller and spouse James; Lisa Hancock and spouse Robert. Also surviving are his grandchildren, Heather Tomazic and spouse Jeffrey; Ashley Osmunson and spouse Thomas; Benjamin Hancock; and Christopher Hancock and four great grandchildren, Justin; Tanner; Karli; and Ophelia. In addition to his parents, he was predeceased by a brother, Farrington Martin,Sr. and grandson, Jeremy Hiller. The memorial service will be held on Thursday, August 25, 2022 at 11:00 am at the Arthur A. Bryant Funeral Home in Honesdale with an interment at the East Dyberry Cemetery. A viewing will be held on Wednesday, August 24 from 4:00 to7:00pm. Memorial donations in lieu of flowers may be made to the Jeremy J Hiller Scholarship ? Honesdale National Bank 733 Main Street Honesdale, PA 18431.

Share Your Memory of
Ronald
Upload Your Memory View All Memories
Be the first to upload a memory!
Share A Memory
Plant a Tree